Welcome to The Stormtrooper Effect

This is where i will review and discuss toys, video games and movies. I collect 3 3/4 inch to 12 inch Star Wars, Iron Man, Batman, Halo toys and other movie memoribillia that appeal to me! As of late i am into Hot Toys 12' inch figures. Thank you for visiting my page and I hope you enjoy browsing through my site as much as I enjoy sharing it with you! We've got pretty awesome toys coming our way, and whilst i love the costume and bodysculpt for Wolverine, i must add that the headsculpt is still somewhat off in my opinion. hair's right, facial hair's right. the nose is right. though...

Still no Hugh Jackman likeness however close. What do YOU think??? 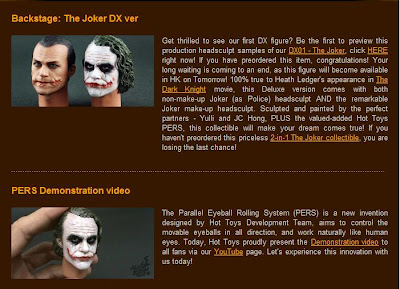 Both the final headsculpts of the DX joker and its Cop uniform alternative head have been released. 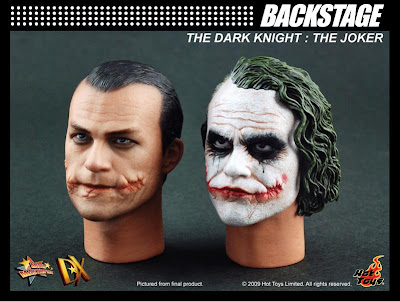 And as far as i can say, i'm pretty sure on my part that i did make the right choice in pre-ordering this superb figure. Can't wait to get my hands on it.

also, here's the link to how the new PERS (Parallel Eyeball Rolling System) works for the joker's DX Headsculpt. If you didn't yet know, Hot Toys is hosting an open poll for fans, toy collectors and whatnots alike to vote for their favourite Terminator Figure they want to see made! And by hell, i must say, this is possibly the one and only chance to get us that iconic T2 Arnie figure we've been living and scrimping and saving all these years for.

So what are you waitin' for? Head down to Hot Toys and POLL NOW!
Posted by Joshua at 9:10 PM 3 comments: 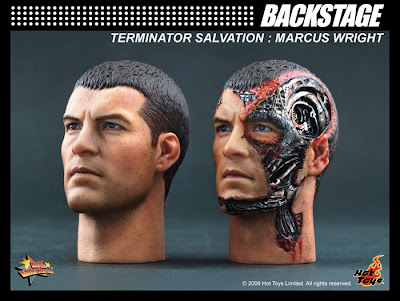 Lookin' good thus far, can't wait to get my hands on him. though its pretty serious damage to collector's wallets with HOT TOYS unloading the figures at one shot, t600s after another , then connor and him.

and if you didn't yet know, there's gonna be a variant of John Connor in his BDUs. possibly sporting scars on his face like the end. Ah well, lets all wait and see.
Posted by Joshua at 7:45 PM 1 comment:

as written in this article, we can expect to see Mark IV, Mark V, Mark VI as well as bruce banner, Black Widow, Whiplash, and War Machine upcoming from hot toys in 2010!

and not just that, with ample research online, i found pictures of what Mark V would look like.
This picture below is Mark V made by hasbro. 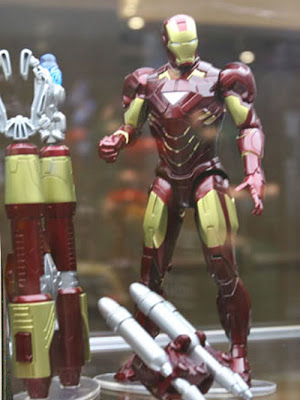 Triangular Chestpiece eh? Well i can't wait for 2010. Boy, the best parts of collecting always is the hype and speculation and geek discussions. Kudos to Mirrorboy for discussing and kickstarting this hype for next year!
Posted by Joshua at 10:45 PM 6 comments: 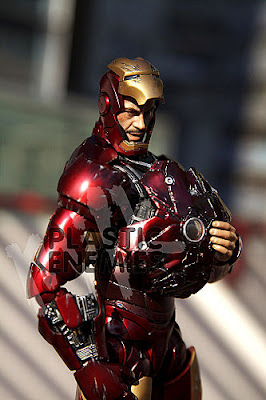 Looking good so far, i must say. The Battle Damaged Iron Man's definitely going to be on my to get list. Kudos to UNDici 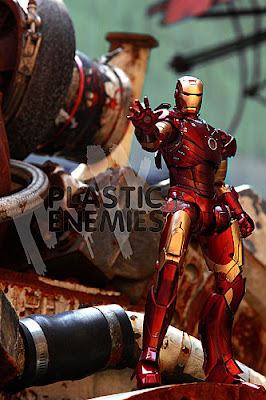 There you have it, as of this morning, Disney now owns Marvel Entertainment. Whilst most fanboy comic book fans are out all over the world ranting and screaming about the endless possibilities of foul ups and mess ups, screw ups and even sell outs,

i say let us be patient, let us wait and see. 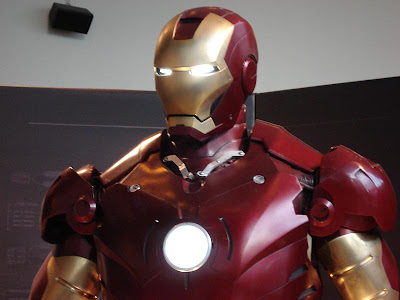 while i wouldn't say the news didn't surprise me, i wont' say it isn't amusing either. I wonder if we'd get to start seeing Marvel characters roaming around Disneyland when it all goes through. Though i'd very much love to see Disneyland stay the same way it does, with its classic characters and all.

and to those already mourning, weeping, tearing their hair out in despair, lets wait and see...a good justification would be how Warner Bros accquired DC and still managed to do such a good job with BATMAN. We'd never know if Disney could be the key to good funding for better quality films from marvel.

If you didn't yet know Marvel actually sold much of its licenses for the rights to their comics to be adapted to film. For example, the Punisher and Blade, due to them being unable to fund it themselves, and Iron Man was the very first that they had a chance to fully finance. Perhaps with Disney all these woes would be easily solved.

My only take on this, is that i'm surprised. wow....Disney...i wasn't half expecting that though. but all in all, lets just wait and see folks.
Posted by Joshua at 11:13 AM 8 comments: 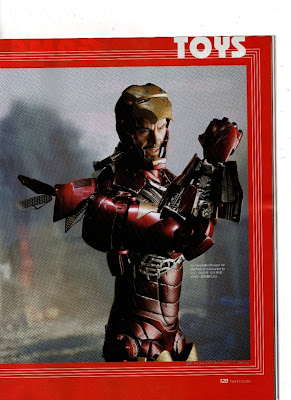 While there has been a lot of speculation as to the accessories we'd be receiving for Hot Toy's newest announcement on the Battle Damaged Iron Man Mark III, we can at least for now, say with some certainty, the items we would get to see!!! 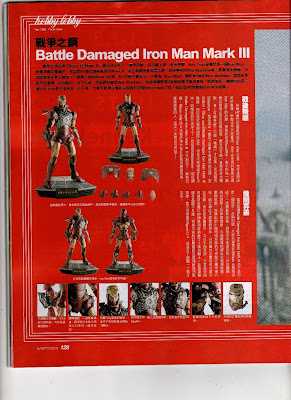 there will be 2 interchangeable heads for Iron Man, One sporting the battle damages with his fight against Iron Monger, and the other, a lift-up faceplate revealing tony stark's head sculpt. Something reminiscent of Mark II, but i do believe its a new sculpt after scrutinizing it thoroughly.

Also there will be 2 pairs of Iron Man hands, including one tony hands, which was seen when he removed his armored arm whilst speaking to Pepper Potts.

The cool thing here, is that we'd also receive two armored chest-plates for this version, one being crumpled and battle damaged and the other, relatively untouched and yet to see action. Best of all we'd be able to see the inner workings of the iron man suit this time around, having a removable section of the chest-plate armor revealing the metal mesh that these hot rod red plates are attached on, just like the scene where Iron Man puts on his armor for Mark III and heads off to Gulmira.

Lastly, there are new additions to the armor in terms of detail, where there'd be flare pockets or whatever you call them on the side of his hips, his arms are now able to expand to its intricate shielding we've seen in the last battle. PLUS if i'm not wrong, he now sports that little shoulder cannons we've seen in action in gulmira!!!! 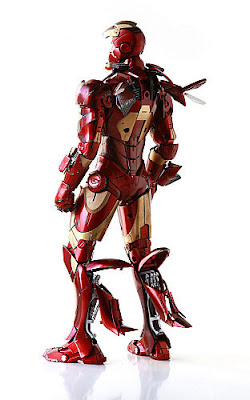 Joshua
Avid collector and fanboy of pop culture action figures which range from 3 3/4 inch to 12 inch. Or simply something nice. That aside, he also has a heart for adventure and any biking expedition. Music makes his world go round. He plays the piano, guitar and drums. Loves martial arts.